Calibration of such a galvanometric setup means finding accurately which laser beam is produced by which pair of mirror rotation angles. This knowledge enables the correct guiding of the laser beam towards a predetermined target.

Over the past decades, several methods have been proposed in which a physical or mathematical model is constructed that emulates the setup. The main drawbacks for these approaches are the hard to handle non-convex optimization problems and the fact that they can not account for machine inaccuracies such as non-planar mirrors.

More recently, as an alternative, data driven models were introduced. These statistical or machine learning methods bypass the underlying physical model completely and find a mapping from the mirror rotations to the resulting laser beam.

We propose a hybrid approach, in which we keep one assumption about the physical world: laser lines are straight lines. In our method we learn a mapping from for instance two mirror rotations to the coordinates of straight lines in 3D-space by means of Gaussian processes. The latter is a way of performing regression in the Bayesian inference paradigm. This method trivially generalizes to other types of inputs such as voltages.

We implement this hybrid model in a calibration procedure and demonstrate this on a Polytec Laser Doppler Vibrometer. We show that out method can outperform previous mathematical models and purely data driven models. Furthermore, we explain how this more accurate calibration can be used in two applications: the aiming of a laser beam and the correction of a 3D scanned point cloud. 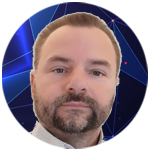 Ivan De Boi obtained his Master’s degree in Electronics and ICT Engineering Technology from the University of Antwerp in 2001. After working as a project engineer for VRT and Atlas Copco for 7 years as, he decided to throw his career around and became a lecturer at the Bachelor in Multimedia Technology program at the Karel de Grote University College. Apart from his teaching assignment he also worked on various research projects in the field of AI and AR/VR, mainly in healthcare and Industry 4.0 context. In 2020, he joined the research group InViLab at the University of Antwerp (faculty of Applied Engineering, department Electromechanics) to work on his PhD regarding the calibration of 3D-sensors using line variety models.

Rudi Penne received his D.Sc. degree (1992) in mathematics from the University of Antwerp (Belgium). There he was appointed a professor (2013) in the Faculty of Applied Engineering. His research interests cover a broad area, including topology, combinatorial and computational geometry, structural topology and rigidity, and projective geometry with applications in robot kinematics and computer vision. Besides fundamental research, he promotes and disseminates science by means of popularizing articles, books, blogs and lectures.

Manage cookie consent
To provide the best experiences, we use technologies such as cookies to store and/or access device information. Consenting to these technologies will allow us to process data such as browsing behavior or unique IDs on this site. Not consenting, or withdrawing consent, may adversely affect certain features and functions.
Manage options Manage services Manage vendors Read more about these purposes
See preferences
{title} {title} {title}